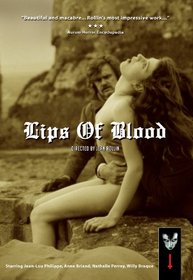 Lips of Blood tells of a young man who has visions of an old castle and a ghostly woman in white. Over time he becomes increasingly obsessed with her, and she appears to him, leading him to a dark gothic cemetery. She then gets him to open up a number of coffins which unleash a hoard of blood crazed female vampires who cause mayhem in Paris. What follows is a series of beautiful, bloody and perverse vampiric set pieces that make Lips of Blood one of Jean Rollin’s most successful vampire films.