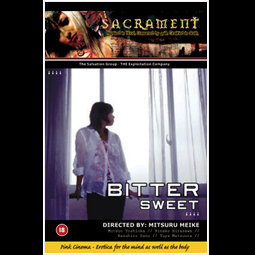 Eleventh release on Redemption’s ‘Pink Film’ label comes from the director of ‘Snow Woman’ and the much talked about anti-Bush farce ‘The Glamorous Life of Sachiko Hanai.

‘Bitter Sweet’ shows a very different side to Mitsuru Meike’s film-making personality. This is a provocative drama about an ordinary young woman with doubts about her approaching marriage who gets involved with an older man. This is a delicately told adult love story about the bitterness and sweetness of life and relationships. A fine example of Japanese cinema. Screened at Vienna International Film Festival 2006 and at 14th Raindance Film Festival.