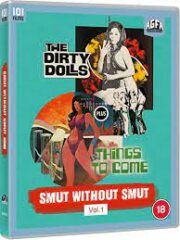 Beneath the dumpsters of America, a netherworld of “adults only” genre movies lurk in the gutters. But what if these movies were less about the smut and more about everything else? “Smut Without Smut” is X-rated genre movies with the X-rated bits removed. In other words, your perception of reality will never be the same again.

A future dystopia dream-epic shot in San Antonio, THINGS TO COME finds Julie leaving her marriage to investigate a mysterious sci-fi cult on behalf of frustrated women everywhere. With a soundtrack that feels like it was cribbed from A CLOCKWORK ORANGE, ambitious sets that look like leftovers from STAR TREK, and no lack of robots, computers, and bloody violence, THINGS TO COME is a truly unique Texploitation headtrip.

Coasting on the fumes of the Manson murders, THE DIRTY DOLLS follows psychopath Johnny and his cultish gang of women as they embark on a bizarro crime spree filled with stolen diamonds, senior citizen drag, grimy sex, and cold-blooded murder. Directed by Stu Segall (DRIVE-IN MASSACRE) under his adult-movie nom de plume “Godfrey Daniels,” this is a sleazy summer-bummer from the wilds of California.