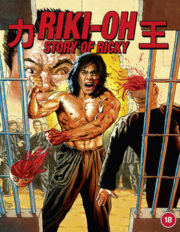 Extreme ‘Manga-in-Motion’ fantasy action-adventure. Banned in many countries around the World. Now totally uncut on DVD for the first time ever!! A radical fusion of brutal martial artistry, extreme violence and dark visuals, STORY OF RICKY is one of the most infamous and disturbing film projects in the history of Asian Cinema.

Based on the Japanese comic-strip ‘Riki Oh’, the movie is set in a futuristic prison where Riki is mistakenly locked up and then systemically tortured by the sadistic warden and his cohorts. Through his radical actions and selfless attitude, Riki quickly becomes a hero for the rest of the inmates and initiates a daring plan to break free from the brutal regime in which he is incarcerated.

Featuring some of the most extreme violence ever recorded on film, STORY OF RICKY is the holy grail of horror and manga fans all over the World. Gore-hounds who indulge in the dubious pleasures of The Texas Chainsaw Massacre, Ichi the Killer and I Spit on your Grave! will be in Seventh Heaven!!