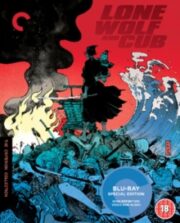 All seven films in the ‘Lone Wolf and Cub’ Japanese samurai action series.

In ‘Sword of Vengeance’ (1971), executioner Ogami Itto is framed for treason and declared an outlaw.

In ‘Babycart at the River Styx’ (1972), Ogami Itto – aka ‘Lone Wolf’ – continues his bloody quest through the land he calls Hell.

In ‘Babycart to Hades’ (1973), the Lone Wolf provides a rare display of compassion when he rescues a young girl from her pimp.

In the fourth film, ‘Babycart in Peril’ (1972), the Wolf has become separated from his Cub, who has fallen into the hands of Itto’s deadly rival.

In ‘Babycart in the Land of Demons’ (1973), Lone Wolf is hired by the Kuroda clan to protect the destiny of its succession.

In ‘White Heaven in Hell’ (1974), the Wolf and his Cub face a new peril when the Yagyu clan leader Retsudo employs his bloodthirsty daughter to destroy them once and for all.