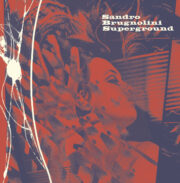 And what if the infamous UNDERGROUND and OVERGROUND albums had a third psychedelic chapter, still secret and unreleased until today?
Yes, you heard correctly: this SUPERGROUND LP is sonically akin to the legendary pair for which composer Sandro Brugnolini will always shine worldwide, and ideally brings the trilogy to a close. Composed and recorded in two sessions between July 1969 and November 1970, the album echoes the shocking 1969’s Charles Manson massacre, with tracks dedicated to the villa at Cielo Drive, in Hollywood, where Sharon Tate e Roman Polanski lived for six months. Some music was also used for an animated short movie signed by Pino Zac, “Radice Quadrata di 3”, a little art-film gem about the consumer society.
The recordings have all in common the terrific line up, featuring MARC 4 members Antonello Vannucchi (organ), Maurizio Majorana (bass), Roberto Podio (drums), along with Angelo Baroncini (guitar) replacing Carlo Pes. An incredible groovy combo that plays a strange psychedelic rock and r’n’b with funky and prog flavor.
Another lost masterpiece from Italian golden age soundtracks finally rescued and brought back in life to see the light of the wax for its very first time.