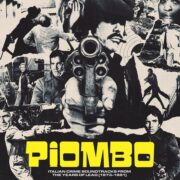 Introducing a new CAM Sugar collection on Italian crime soundtracks (Poliziottesco / Spaghetti Crime); PIOMBO paints a ‘picture in sound’ of The Years of Lead (1973–1981), a controversial period when the escalation of political violence and terrorism in Italy reached its climax. Italian cinema documented this season with Polizieschi (aka Spaghetti Crime Films / Poliziotteschi / Euro Crime): a genre that, drawing from the French Polar tradition and American Blaxploitation, encompassed thrill and action (but also comedy and drama) in a whirlwind of breath-taking car chases, heists, kidnaps, gunfights, political terror attacks, and brutal violence.

The sound of the collection is various and tremendously contemporary (this genre was sampled by the likes of Madlib and synched by Quentin Tarantino): its core is American jazz-funk, with episodes of acid progressive rock (“Il grande racket”, composed by the De Angelis brothers, Guido and Maurizio, for Enzo G. Castellari’s masterpiece), synth-infused disco music of Stelvio Cipriani (“Body Guard”, one of the 9 previously unreleased treasures of this compilation), electronic music and more.