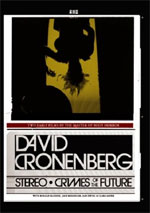 STEREO Somewhere in the future, the Canadian Academy for Erotic Inquiry is investigating the theories of para-psychologist Luther Stringfellow. Seven young adults volunteer to submit to a form of brain surgery that removes their power of speech but increases their power for telepathic communications. An unseen group of students observes the results. As the experiment progresses, Stringfellow’s theories are borne out. Later, aphrodisiacs and various drugs are introduced to the subjects to expose an inherent ‘polymorphous perversity’. In the end, they are isolated from each other, provoking antagonism and violence between them, resulting in two suicides. CRIMES OF THE FUTURE Crimes of the Future details the wanderings of Tripod (Mlodzik), who is searching for his mentor, the dermatologist Antoine Rouge. Rouge has disappeared following a catastrophic plague resulting from cosmetic products, which has killed the entire population of sexually mature women. Tripod meets various individuals and groups of men who are trying to adjust themselves to a defeminised world. One man parodies childbirth by continually growing new organs which are removed from his body. Eventually Tripod comes upon a group which is holding a five-year-old girl, and they urge him to mate with her. He senses the presence of Antoine Rouge.