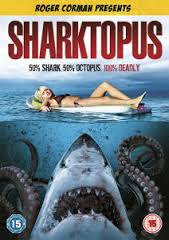 The U.S. Navy commissions a group known as ‘Blue Water’ to genetically engineer a half-shark, half-octopus for combat. During a demonstration destroying drug traffickers off Santa Monica, the beast escapes the control of its creators and makes its way to Puerto Vallarta. Hunted by Blue Water and a television crew, the monster attacks numerous beach-goers. As a finale, Andy Flynn and Nicole Strands destroy Sharktopus after Sharktopus kills Nicole’s father and the creator of Sharktopus, Dr. Nathan Strands.