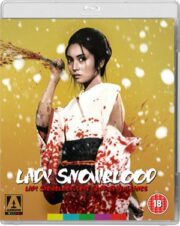 DEMON OF VENGEANCE UNLEASHES A TORRENT OF CRIMSON HELL!

From the original manga by Kazuo Koike (Lone Wolf and Cub) and Kazuo Kamimura and the main inspiration for Quentin Tarantino’s Kill Bill, Lady Snowblood is a blood spattered Samurai masterpiece from the golden age of Japanese cult cinema!

Meiko Kaji (Female Prisoner Scorpion / Blind Woman’s Curse) is Yuki, a women raised from birth for one terrible, blood splattered purpose…To murder those who raped her mother and left her to rot in a stinking women’s prison, where she died in childbirth. Trained in deadly fighting arts and fatal sword play, Lady Snowblood is cursed to wander the lands in pursuit of her single purpose. She is a demon of vengeance, only sated by the crimson blood of those who stole her mother from her.

Then, in the exciting sequel – Lady Snowblood: Love Song of Vengeance – Yuki is caught up in the corrupt and murderous world of politics as she is co-opted into spying by the head of the secret police against anarchists and enemies of the status quo. Expect more outrageous revenge and fountains of blood.