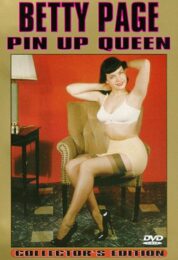 Bettie Page (in her films credited as Betty Page) was the top pin up queen of the 50 s and has become the cult model of the last decades. Bettie was known for her distinctive hair-cut and figure when she became the most photographed pin up of all time.
In the period of 1951 until 1956 she appeared in 3 feature length burlesque films (Striporama, Varietease, Teaserama) and several Exotic Dance films, featured on this DVD.

for any fan of Page, this is a fantastic DVD
– Cult Cuts