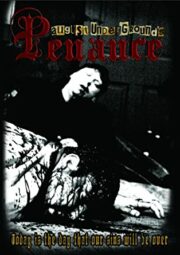 Has someone ever handed you a movie, not telling you one thing about it, only telling you to watch it. What if that tape was the personal home video of two sociopaths on a killing spree? This is their home movie, for their eyes-only. This is August Underground’s PENANCE. The third and final film in the AU franchise Directed By Fred Vogel and Starring Cristie “Crusty” Whiles. PENANCE shows the dark decline of the two nameless killers from the previous films as they continue to videotape their madness on their path to destruction.