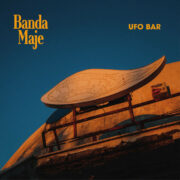 More a family than a band, BANDA MAJE formed in a home studio in the historic district of Salerno, in Southern Italy, on the initiative of Peppe Maiellano (composer and keyboards) and Tonico Settanta (producer, rapper and DJ). The collective has an ever-changing number of members, all of whom – a bit like the lively port city they are from – exist at the crossroads between Italian melodies and imported genres like funk, soul and disco.

Listening to the album’s eight funk- and soul- infused tracks also means seeing stories unfold in the streets of this re-imagined city: from the jubilant uprising organised by the women from the Rione Fornelle neighborhood in “Fornellesse”, to the cigarette smuggling story in “P’ ciel, p’ mar, p’ terr”; from the distinctly southern Italian pucundria (bittersweet melancholy) in “Sunday Embarcadero”, to the saga of provincial nightlife in “Living Disco Club”.

While the LP’s Side A is sunny and cheerful, its…  more