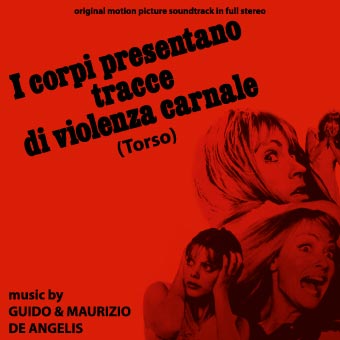 “I corpi presentano tracce di violenza carnale” was directed in 1973 by the italian Thriller specialist Sergio Martino (“il tuo vizio è una stanza…”, “lo strano vizio della signora Ward”). With ttme passing the movie has become a little cult movie, especially in America, released with the title “Torso”. Placed in the city of Perugia, the plot tells about an university female student (Suzy Kendall) stalked by a cruel serial killer. In this movie Martino pushed the pedal on the most extreme gore and splatter…the victims, differently than the movie’s Italian title do not reveal traces of carnal violence, but are mutilated with very close up details. The long central part of the plot, where the character played by Kendall and her girlfriends, escape the murderer and refugee in a isolated house, is a classic. The girls, protagonist’s friends, are killed by the madman and the bodies are made in pieces. The girl is forced to watch the slaughter hiding herself behind the furniture. This particular scene is rich of tension, shooted magistrally by Martino who confirms his talent in shooting tension movies. The score was assigned to bothers Guido & Maurizio De Angelis, and now Digitmovies presents it in a complete version and in full stereo from the original 1973 master tapes. At that time, no record was issued even if among the recorded takes we have discovered that one track was recored as “record version”,so we presume that in those days that track was purposed for a 45 rpm single that never saw the light. In 1999 Rca issued a CD in the series OST (74321 – 69391 – 2/ OST 145) containing 11 selected tracks from “I corpi presentano tracce di violenza carnale” couplet to 11 tracks from “Gatti rossi in un labirinto di vetro” OST by Bruno Nicolai (available on complete form on Digitmovies CDDM 097). Now this definitive CD, contains 22 inedit tracks with a total time of 71:21. The De Angelis brothers, without any doubt are among the most prolific screen composers spacing really every movie genre, have written a score that gives big energy to the violent scenes of the movie, but at the same time, music themes that have their own life outside the screen. The OST is based on the Pop and romantic main theme with country and a little Lounge sound as background to Perugia university students’ life, introduced in Main Titles (Tr.1) and then reprised in (Tr.3, Tr.16,Tr.17,Tr.18 e in Tr.33, the movie’s end credits). The De Angelis Bros. Have created a series of recurrent gloomy themes to describe the killing acts of a mysterious masked serial killer: a motif given by a slow and obsessive guitar alternated to piano with organ accompaniment and variations with piano (Tr.2,Tr.5,Tr.14,Tr.15,Tr.19,Tr.21,Tr.23, Tr.25, Tr.27,Tr.30,Tr.31); another Progressive music flavoured theme recurs in Tr.7, Tr.12,Tr.20,Tr.24,Tr.29,Tr.32),a melanchonic,almost minimalist piano in Tr.9, terrorizing voices in Tr.10,Tr.13,Tr.17,Tr.22 with gloomy sound effects obtained with reversed recording and Beat music for the university students (Tr.4). Products